Faares Deeb started playing Violin at the age of 8, and eventually transitioned to playing the the Cello a year afterwards. At the age of 13 he placed first in the Rhode Island All-State Music Festival Junior division, and was the principal cellist of the All-State Junior orchestra. He did so again when he was 16, this time in the Senior division of the competition, and was principal cellist once again. In the same year he was a co-winner of the Concerto/Aria competition at the Rhode Island Philharmonic Music School, and performed Joseph Haydn's Cello Concerto in C Major, mvmnt. 1, with the Rhode Island Philharmonic Youth Orchestra (RIPYO). Since then, he has been involved in music programs at places like Rhode Island College, where he played in a masterclass with world renowned Cellist Sergey Antonov. From 2013 to 2017, he studied under cellist Daniel Harp, a cello teacher at Brown University. Currently, he studies under Theodore Mook, cellist and music coach at the University of Rhode Island, where he performs concerts with the Orchestra and Honors Chamber Ensemble. He especially enjoys playing Classical Music, specifically works like J.S Bach's unaccompanied Cello Suites and David Popper's 40 etudes. Faares is a double major in Music Performance and Chemical Engineering at URI, where he enjoys classes of various subjects, including Physics, Calculus and Music Theory. He aspires to one day be part of a professional orchestra, as well as to specialize in lithium ion batteries. In his regular life, Faares loves composing small works of music, as well as leading a healthy lifestyle through rigorous fitness and nutrition. He particularly has a passion for sharing and spreading the beauty of the cello to the world around him, and will take any opportunity to perform for friends and family. 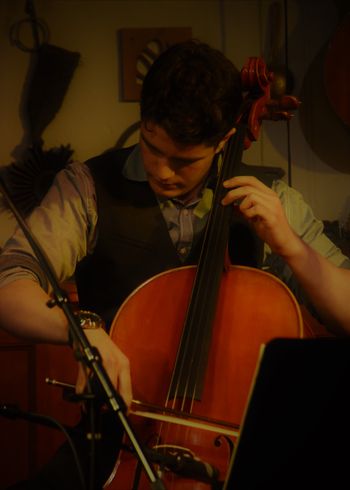