Aisha Hasan first started to appear on stage at the age of four in a variety of dances ranging from Ballet to Bollywood. She has performed for many charitable events such as the annual Nutcracker at the University of North Florida. She also danced competitively, her team winning the opportunity to perform at the Orlando Magic half time show three years in a row.

Aisha discovered her talent for singing in fifth grade when she auditioned and was selected for the Florida All-State Elementary Chorus (FMEA). This opportunity introduced her to singing, sparking her passion for song and musical theatre. Most recently, in February 2019, she was cast to play the lead of Fiona in her school musical production of "Shrek Jr" at The Bolles School.

Aisha has also appeared in a variety of shows as lead characters and in ensemble with Bollywood Dance Mania and Apex Musical Theatre. She loves the connection she has with her peers and with the audience. Her favorite Broadway shows to date are Hamilton and Les Miserable. She knows all their songs and lyrics by heart!

In addition to musical theatre Aisha enjoys singing Bollywood and classical Indian songs. In her spare time, Aisha loves to listen to her playlists on Spotify, make covers of her favorite artists, travel with her family, hang out with her friends and of course, play with her cat, Yuki. Aisha hopes to develop her singing skills further and eventually write and perform her own songs. 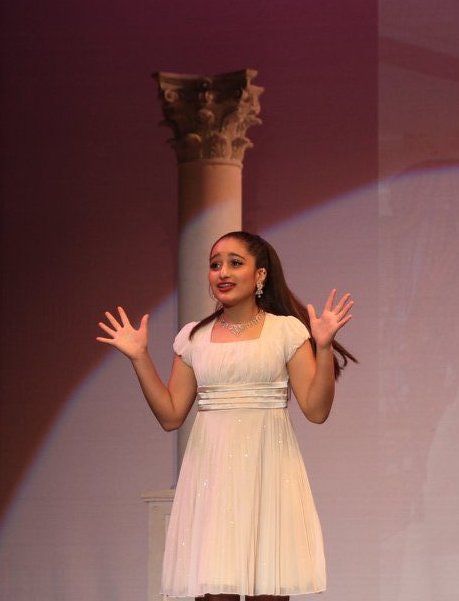